If you have an outdoor space where you can congregate with friends and family during the summer months, then you’re probably going to want to purchase the best outdoor fan available. Regardless of whether you want a ceiling fan for your covered porch or patio, or simply want a misting fan that can be set in front of guests, we decided to go ahead and review some of the best models available. Fans that will help make everyone more comfortable during the dog days of summer and ones that will last for many years to come. Below are some of the fans that we thought might interest our readers.

Also Consider
Honeywell Palm Island Tropical 52-Inch Indoor/Outdoor Ceiling Fan  (review)
Buy it on Amazon
Note: We may earn a small commission when you buy through links on our site. Learn more

Anyone who is looking to add a bit of style to their outdoor covered areas along with some nice air circulation is going to want to take a closer look at this ceiling fan from Honeywell. This outdoor fan is called the Belmar and it’s damp-rated so it can be easily used in breezeways, verandas, patios, or gazebos. Although this ceiling fan can’t be exposed completely to the elements, it is durable enough to be used outdoors in covered locations. This product’s blades are made of ABS plastic that has a wood-like appearance that makes them a beautiful as well as sturdy choice.

This fan has 52-inch blades and has frosted closed bowl fixtures that hold two E26 bulbs. This fan can be mounted in a variety of different ways and is tri-mount compatible. It can be mounted as a flush-mount, with a down rod or angle mounted. It also features a motor that’s not only extremely quiet but also has three speeds so the consumer can set it according to their comfort level. Another thing worth mentioning is that the fan can be reversed, so it can be used for both the summer and winter seasons. Now there’s no reason for anyone not to enjoy their outdoor space year-round.

The last thing that I’d like to talk about is the ceiling fan’s finish and how easy it is to install. This product has a beautiful bronze finish that should fit well into any outdoor space’s décor, and it should take the consumer about an hour to install it. Once it’s installed, however, it should provide the consumer with many years of service and transform their outdoor space into something that they’re going to want to use all year round. Sure, it costs a little more than other ceiling fans, but in our opinion, it’s worth it.

This fan is a little bit different from the outdoor ceiling fans that we’ve reviewed. That’s because this outdoor fan doesn’t get mounted but instead sits in front of the people using the outdoor space. It’s a product known as a misting fan and it’s made by a company named Lasko. This is a product that attaches to a garden hose and creates a fine mist and a cool breeze that can cool down a person on even the hottest summer day. It can reduce air temperature around a person up to 25-degrees, which anyone can see creates a refreshing bubble of cool air around the person sitting near it.

This product is ideal for people to use not only on their deck or patio but is also portable enough to be taken in other places, as long as a person has access to a power supply and a water hose hookup. One of the things that we liked about this product was that it had a 90-degree pivot function that allows the consumer to direct the flow of their mist where they want it. This feature, coupled with automatic louvers for a wider sweep, expands the comfort bubble for people and allows them to cool a larger area than just the space immediately in front of them.

We also liked that this product had three adjustable speeds so the user can set the fan’s speed according to their personal preference and comfort level. As great as this fan is, however, there is one thing that we thought could’ve been better: its faucet coupling. It tended to leak just a little bit, not enough to be a concern, but enough to be annoying. It shouldn’t cause any problems, but in our opinion, a fan of this price range shouldn’t leak any amount of water from its hose coupling.

Although we’re sure that this outdoor fan won’t be a good fit for everyone’s outdoor space because it has a tropical motif, people who are looking to add that style to their outdoor spaces are going to be pleased with it. This quality fan has a 5 ETL damp-rating—which allows it to be used easily for outdoor spaces without having to worry about if the fan is going to short out. This fan also has easy controls that use a pull chain that can be pulled to turn the fan on or off.

This fan has a quiet 4-speed reversible motor that can be used easily both during the summer months and during the winter months. It’s equipped with 52-inch blades that allow the fan to move quite a bit of air, even though we can’t say that we’re entirely happy with the highest setting of this fan. We felt like it’s the highest setting could’ve been a little stronger, but perhaps that’s use being a little bit too overcritical. We don’t think it’s a major flaw, but we do think that it’s a minor inconvenience. Even so, we still think that it’s a fan that many of our readers are going to enjoy using regularly.

We would like to close this review by talking about some of the ways that this fan can be mounted. It has a 3-position tri-mount that can be mounted in a close mounting position, a down-rod position, or even an angled position. It’s up to the consumer to decide how they need to mount it according to the location its being mounted and their personal preferences. No matter how it’s installed, however, we’re sure that this outdoor fan will last the consumer for many, many years. We think it’s a quality model that consumers will enjoy cooling their outdoor space with.

A Buying Guide For Outdoor Fans

Now that we’ve gone through a few of the best outdoor fans that people can buy, we wanted to expand on the subject a bit more and give our readers information that will help them make a good buying decision. With that said, below are some tips that will help all of our readers choose the outdoor fan that suits their outdoor space, their needs, and of course, their budget.

Choose Between A Ceiling Or A Misting Fan

Even though most articles consider all outdoor fans to be ceiling fans, the truth of the matter is that misting fans are also a viable option for anyone looking to cool down or circulate air in an outdoor space. So, let’s talk about each of these options before continuing on with this guide.

The main feature, and perhaps drawback, of ceiling fans, is that they’re stationary. Once they’re installed in a particular place, that’s where they’re going to be forever. This is good for areas where there’s already seating, but not so good for more open outdoor spaces where people tend to move around a lot.

Outdoor mist fans are a more portable option for most consumers, although they do have to be near an electrical outlet and a hose hooked up to an outdoor spout. These fans work by imbuing the circulating air with a fine mist of water. This can have even more of a cooling effect than what a ceiling fan can produce. When choosing a mist fan, you should look at a few things such as the number of fan speeds, the length of the power cord, and whether the faucet coupler leaks or not.

Another thing that the consumer has to think about is the rating of the fan. The rating of the fan will determine whether the fan is suitable for the space it’s going to be used. For example, indoor fans work well indoors, but they should never be used in outdoor spaces. When it comes to outdoor fans, they come with two distinct ratings: Damp and Wet rated fans.

The main difference between damp and wet rated fans is how much moisture they can withstand. A Wet-Rated fan can be used in direct rain, but Damp-Rated fans can’t be directly installed in the location where they’re going to be rained on. Damp-rated fans are the fans that go into enclosed spaces that have ceilings but open sides like a gazebo our open-front porch.

Rain isn’t the only environmental feature that a fan might have to put up with, so if you live in certain areas, then you might want to give the fan a little bit of extra consideration. For example, if you live in a coastal area, then you’re probably going to want to purchase a ceiling fan that’s specifically designed to hold up to salt air. And if you live in an area with high winds, then make sure to get a fan that’s rated for high winds.

The next thing that you’re going to want to think about is the size of the fan. Obviously, the bigger the fan is in the more breeze it’s likely to produce. It’s important to purchase a fan big enough to cool the area it’s going to be used, but not so big as to have a negative impact on your wallet.

Think About Whether You Need Lighting

Obviously, this only applies to ceiling fans, but it is something to think about. Having lighting built-into the ceiling fan can help it add to the overall ambiance or prevent you from having to figure out whether you want a fan OR a light.

How Easy Is It To Install?

You might also want to take a few moments and think about how easy the fan is to install. If it’s a mist fan, then it merely needs to be plugged in and then hooked up to a hose. However, if it’s a ceiling fan, then it’s going to require a bit more installation. For some fans, you might even have to have it professionally installed by an electrician. Just something to keep in mind.

How Does The Fan Look?

The last thing that you’re going to want to consider is how the fan looks in the space where it’s going to be installed. Does it tie the entire space together or does it stick out like a sore thumb” Is it high enough to allow people to walk underneath it or does it hang too low? All of these things are something that you should think about before committing to a particular fan. 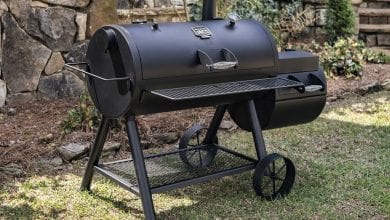 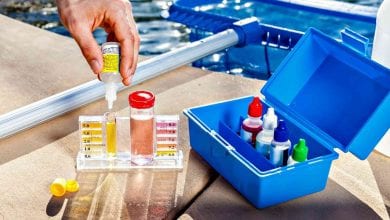 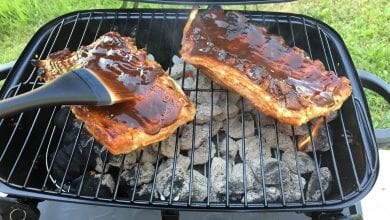 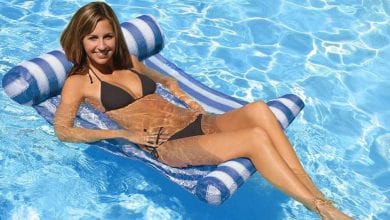